The unintended consequences of micromanaging nature

We must tell our readers about the collateral damage of misguided attempts to manage nature more often than we would like.  We prefer positive stories, but in the hope of a better future we must also inform the public of the unintended consequences of the many projects that are killing one species of plant or animal based on the mistaken assumption that another plant or animal will benefit. 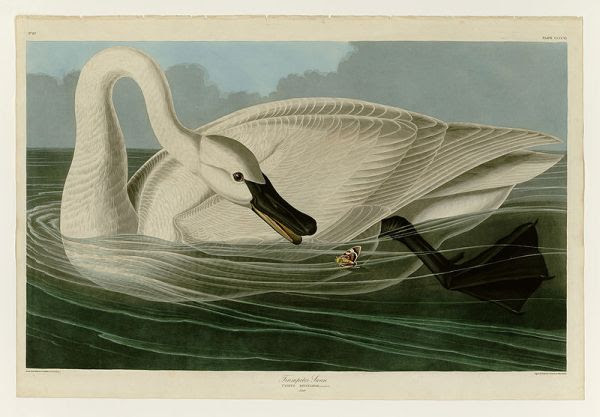 Trumpeter swan by James Audubon
In this case, a project sponsored by the Nature Conservancy decimated the population of rare Arctic grayling fish in Centennial Valley, Montana, by damming the streams to create ponds for the benefit of the equally rare trumpeter swan.  The grayling had spawned in those streams and the population plummeted when the streams were dammed.
The Nature Conservancy scientist who was interviewed by National Public Radio for this story said, “There are lots of examples where we try something that sounds like a good idea [and it] turns out not to be that good of an idea.  Then [we] remedy it and—hopefully—never try it again.”
Unfortunately, they ARE trying it again.  Now the scientists are trying to compensate for the damage to the grayling population by killing cutthroat trout that is considered a predator to the grayling.  The cutthroat is not native, so that also makes it a candidate for eradication.  It’s as though we are on a killing treadmill.  One mistake seems to lead to another.
Stop and think before you shoot! 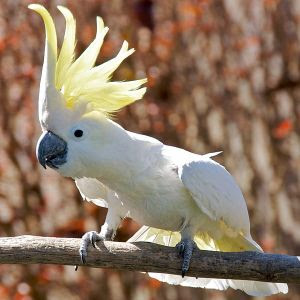 Cockatoo. Creative Commons
A bird lover in Hawaii takes a more thoughtful approach to the suggestion that introduced cockatoos and African parrots should be shot, based on the assumption that they are competing with the dwindling population of native birds.  He points out that the native birds nest in the ground, while the cockatoos and parrots nest in cavities in the trees.  Most of the native birds are nectar eaters, while the cockatoos and parrots eat seeds and nuts.  So, he wonders if the introduced birds are really a threat to the native birds.
The exotic birds are either escaped pets or the descendents of them.  The author of the article urges pet owners to take care of their pets and make a permanent commitment to their care.  Releasing them into the forest is making them a target for people who think killing them would benefit other birds.
The author is not opposed to killing non-native animals when absolutely necessary, but he is at least willing to carefully consider if it is necessary, in his opinion.   He is comfortable with the killing of rats, pigs, and feral cats, for example.
Million Trees takes this question a step further.  We don’t think humans should micromanage nature.  We don’t have enough information to presume to know better than nature what is best.  We also have our own anthropomorphic criteria for which species is more important than another.  Our judgment is self-serving and is not a substitute for the even-hand of nature.   Nature follows the simple rule of “survival of the fittest.”  Nature is as likely to save the lowly spider as it is to save the beautiful trumpeter swan.
A parable to illustrate the point
This parable, retold in Fanaticism of the Apocalypse (1) illustrates the futility of man’s attempt to control nature:
“Noah, as he is loading the animals onto the Ark, is alarmed by the large number of candidates.  Mammals, birds, marsupials, penguins, primates, and lizards have already gone on board.  The ass, the ox, the giraffe, the elk, the stag, the lion, and the cat urge the patriarch to raise the gangplank and close the hatches.  The boat is chock-full, the cedar hull is about to crack open, the Deluge is threatening.  Outside, a crowd of harmful or misshapen pests—cockroaches, toads, slugs, spiders—asks to be taken on.  The toad speaks on behalf of his unsightly comrades:  he pleads their cause with eloquence, pointing out to the Patriarch that they perform a useful function in nature.  In God’s design, nothing is ugly or repugnant:  everything is ingenious, even invertebrates, mollusks are necessary.  No one has the right to destroy these creatures of the Lord.  But Noah turns on his heel and decides to raise the anchor.  Then a cloud of insects and pests assails him:  fleas climb on his legs, crabs crawl in his pubic hair, lice swarm on his head, leeches, stinkbugs, and mosquitoes stick to his skin without him noticing them.  Snakes slip into his flowing hair, spiders take up residence in his beard.  That is how the whole bestiary was spared.”
We fiddle with nature at our own peril.
*****************************
(1)    Pascal Bruckner, The Fanaticism of the Apocalypse, Polity, May 2013

Reblogged from Death of a Million Trees
Posted by Delphyne at 10:14 AM

Email ThisBlogThis!Share to TwitterShare to FacebookShare to Pinterest
Labels: Environment