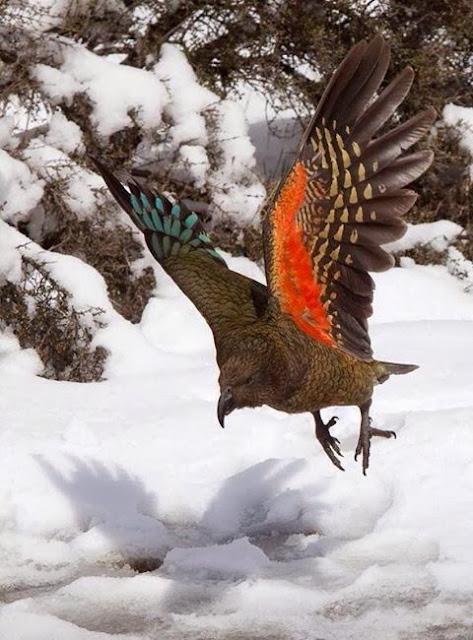 The kea is an unusual parrot. It is the only truly alpine parrot in the world, and gained early notoriety among settler farmers for attacks on their sheep. Innately curious, kea are attracted to people wherever they enter its mountain domain, and are a feature at South Island ski-fields and mountain huts. Their attraction to people and their paraphernalia is a two-edged sword, providing both new threats and new opportunities.
Identification
The kea is a large, strong-flying, olive-green parrot with scarlet underwings and a slender grey-black bill. Sexually dimorphic, female body mass is about 20% less than males and the bill is shorter. Juveniles have yellow ceres and eyelids, which fade to grey as the bird matures.
The commonest call is a long, loud, high-pitched descending cry which may be broken “kee-ee-aa-aa”, or unbroken “keeeeeaaaa”. Many quiet contact calls are given. Juvenile calls are less stable in tone, being more of a loud uncontrolled whooping or squealing.
Kea are unlikely to be confused with other species. Kaka are smaller, olive-brown and very rarely seen above the timberline. They excavate the wood of live trees, whereas keas do not. Kaka have more varied calls, including fluting whistles and harsh grating ‘skraaarks’. The extremely rare and localised kakapo is larger, flightless and nocturnal. It is yellow-green rather than olive-green and lacks a scarlet underwing.
Distribution and habitat
Kea range over about four million hectares along the axial ranges of the South Island, from Farewell Spit to Waitutu, plus the Kaikoura Ranges. They can be found from coastal dunes to high alpine peaks, but are most common in montane forests and adjacent subalpine and alpine zones. They are absent from the Marlborough Sounds, Catlins, Blue Mountains and both the North Island and Stewart Island.
Kea mainly nest within native forest. Their foraging habitat includes all types of native forest, sub-alpine scrub, tussock and herb-field. They socialise on prominent rocky outcrops and windy saddles above or below the timberline, and are frequently reported in pine forests adjacent to native forest.

You can read the rest of the article here.