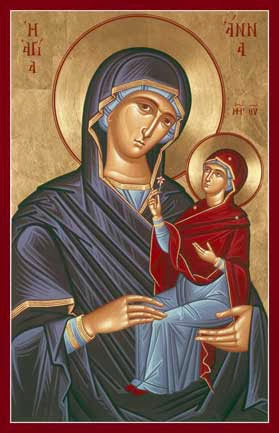 I saw this image a few days ago on Carol Christ's FB page with the explanation:


No it is not Mother Mary and baby Jesus, it is baby Mary with her Mother Anna, a reminder of Persephone and Demeter, and the ancient reverence for the generations of women.

First, I really like this type of iconography.  A lot.

Secondly, it got me thinking about Mary as a baby/child/girl/maiden - Virgin.

And about Demeter and Persephone.  About Mother and Daughter.  About their relationship.  About what knowledge is transmitted through Mother to Daughter, both in utero and after birth. 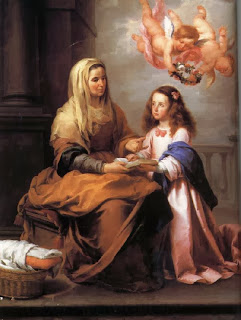 It makes me want to know what kind of book Anne and Mary are reading in Murillo's painting.  Women in ancient patriarchal cultures weren't afforded the luxury of being educated - even in current times, many females are not deemed worthy of being educated - look at Malala shot last year by the Taliban for going to school.

Perhaps it contained poetry, like this one written by Donna Wilshire:

Spring's daughter,
Full of Herself and Her blooming
Her Becoming
Her skin, flowering fresh petals
dew-pink, golden or brown
Her blushing parts vibrant
burgeoning with Possibility
Oh the Possibilities in Herself
the blossoming of Herself
the belonging to Herself

HEBE, VIRGIN!
Not belonging to mother,
not to father,
not to lover,
The Virgin belongs to Herself alone!

I'm not one who subscribes to the usual definition of Virgin as a woman who has not had sexual intercourse.  I rather like this definition:

With her title "Holy Virgin," Mary joined the ranks of many other Goddesses with the same title: Athena, Asherah, Astarte, Aphrodite, Venus, Anat, Ishtar, Diana, and others. Clearly, since many of these Goddesses are also "Love Goddesses," the ancient meaning of the word "virgin" differs from our modern conception.

"Virgin" indicated an independent autonomous woman, a woman not required to answer to any man or child. The title had little to do with abstinence from sexual intercourse (A, B, *).

Perhaps Anne was relating the ancient stories from women and about women who were free and unencumbered by any philosophy or religion.  Perhaps she was teaching the connection between the female body, sexuality and the deep connection to Nature.  Perhaps she was explaining that freedom was the path of and to unconditional love.

Far more interesting for me to ponder than the Madonna/Whore dichotomy that's been pushed on to women.

Rebecca is hosting another yearly Virgin A Day over at her place - be sure to check out all of the offerings.