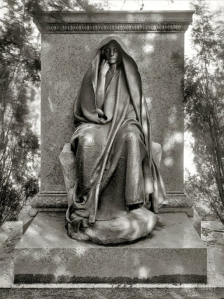 On Friday morning, 27 people were reportedly shot and killed at Sandy Hook elementary school in Newtown, CT. According to sources, 18 of these casualties were children. This is the second mass shooting in the US this week, after a gunman opened fire in an Oregon shopping mall on Tuesday, killing 2. ABC News reports that there have been 31 school shootings in the US since Columbine in 1999, when 13 people were killed.


The rate of people killed by guns in the US is 19.5 times higher than similar high-income countries in the world. In the last 30 years since 1982, America has mourned at least 61 mass murders. Below is a timeline of mass shootings in the US since the Columbine High massacre:


December 11, 2012. On Tuesday, 22-year-old Jacob Tyler Roberts killed 2 people and himself with a stolen rifle in Clackamas Town Center, Oregon. His motive is unknown.


September 27, 2012. Five were shot to death by 36-year-old Andrew Engeldinger at Accent Signage Systems in Minneapolis, MN. Three others were wounded. Engeldinger went on a rampage after losing his job, ultimately killing himself.

August 5, 2012. Six Sikh temple members were killed when 40-year-old US Army veteran Wade Michael Page opened fire in a gurdara in Oak Creek, Wisconsin. Four others were injured, and Page killed himself.

July 20, 2012. During the midnight premiere of The Dark Knight Rises in Aurora, CO, 24-year-old James Holmes killed 12 people and wounded 58. Holmes was arrested outside the theater.

May 29, 2012. Ian Stawicki opened fire on Cafe Racer Espresso in Seattle, WA, killing 5 and himself after a citywide manhunt.

April 2, 2012. A former student, 43-year-old One L. Goh killed 7 people at Oikos University, a Korean Christian college in Oakland, CA. The shooting was the sixth-deadliest school massacre in the US and the deadliest attack on a school since the 2007 Virginia Tech massacre.

January 8, 2011. Former Rep. Gabby Giffords (D-AZ) was shot in the head when 22-year-old Jared Loughner opened fire on an event she was holding at a Safeway market in Tucson, AZ. Six people died, including Arizona District Court Chief Judge John Roll, one of Giffords’ staffers, and a 9-year-old girl. 19 total were shot. Loughner has been sentenced to seven life terms plus 140 years, without parole.

August 3, 2010. Omar S. Thornton, 34, gunned down Hartford Beer Distributor in Manchester, CT after getting caught stealing beer. Nine were killed, including Thornton, and two were injured.

March 29, 2009. Eight people died in a shooting at the Pinelake Health and Rehab nursing home in Carthage, NC. The gunman, 45-year-old Robert Stewart, was targeting his estranged wife who worked at the home and survived. Stewart was sentenced to life in prison.

February 14, 2008. Steven Kazmierczak, 27, opened fire in a lecture hall at Northern Illinois University, killing 6 and wounding 21. The gunman shot and killed himself before police arrived. It was the fifth-deadliest university shooting in US history.

February 7, 2008. Six people died and two were injured in a shooting spree at the City Hall in Kirkwood, Missouri. The gunman, Charles Lee Thornton, opened fire during a public meeting after being denied construction contracts he believed he deserved. Thornton was killed by police.

December 5, 2007. A 19-year-old boy, Robert Hawkins, shot up a department store in the Westroads Mall in Omaha, NE. Hawkins killed 9 people and wounded 4 before killing himself. The semi-automatic rifle he used was stolen from his stepfather’s house.

April 16, 2007. Virginia Tech became the site of the deadliest school shooting in US history when a student, Seung-Hui Choi, gunned down 56 people. Thirty-two people died in the massacre.

February 12, 2007. In Salt Lake City’s Trolley Square Mall, 5 people were shot to death and 4 others were wounded by 18-year-old gunman Sulejman Talović. One of the victims was a 16-year-old boy.

October 2, 2006. An Amish schoolhouse in Lancaster, PA was gunned down by 32-year-old Charles Carl Roberts, Roberts separated the boys from the girls, binding and shooting the girls. 5 young girls died, while 6 were injured. Roberts committed suicide afterward.

March 25, 2006. Seven died and 2 were injured by 28-year-old Kyle Aaron Huff in a shooting spree through Capitol Hill in Seattle, WA. The massacre was the worst killing in Seattle since 1983.

March 12, 2005. A Living Church of God meeting was gunned down by 44-year-old church member Terry Michael Ratzmann at a Sheraton hotel in Brookfield, WI. Ratzmann was thought to have had religious motivations, and killed himself after executing the pastor, the pastor’s 16-year-old son, and 7 others. Four were wounded.

July 8, 2003. Doug Williams, a Lockheed Martin employee, shot up his plant in Meridian, MI in a racially-motivated rampage. He shot 14 people, most of them African American, and killed 7.

July 29, 1999. Mark Orrin Barton, 44, murdered his wife and two children with a hammer before shooting up two Atlanta day trading firms. Barton, a day trader, was believed to be motivated by huge monetary losses. He killed 12 including his family and injured 13 before killing himself.

April 20, 1999. In the deadliest high school shooting in US history, teenagers Eric Harris and Dylan Kiebold shot up Columbine High School in Littleton, CO. They killed 13 people and wounded 21 others. They killed themselves after the massacre.

And from the files of "What were they thinking" comes this: 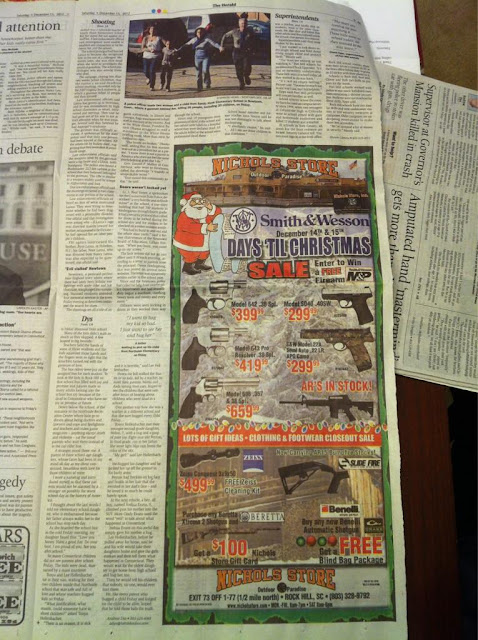 The Herald, a South Carolina newspaper, has issued an apology after prominently featuring an advertisement for a gun sale adjacent to a story about Friday's mass shooting at Sandy Hook Elementary School in Newtown, Conn.

Email ThisBlogThis!Share to TwitterShare to FacebookShare to Pinterest
Labels: Politics, This disturbs me