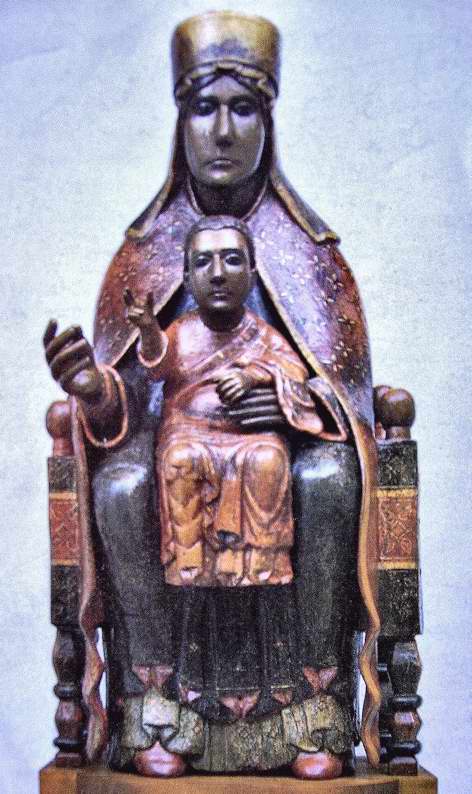 Meet the Madonna del Tindari of Sicily.  I had never heard of Her before and through the magic of the internet (quasi telepathic transmissions from The Lady), bumped into Her today.  She wanted to participate in Virgin a Day and who am I to refuse Her that request?

A little about Her, gleaned from various sites on the web - click on the links to see where I found the information.


The story of how the Black Madonna arrived in Tindari is the stuff that legends are made of. According to local tradition, the statue, which is certainly of Byzantine origin, was one of many works of art smuggled out of Constantinople in the 8th and 9th Centuries during the period of Iconoclasm initiated by Emperor Leo III. A storm forced the ship carrying the Black Madonna into the port of Tindari, where the sailors deposited their load at the local abbey for safekeeping. She now sits behind the altar with the inscription "nigro sum sed formosa" (black am I, but beautiful).


Another legend regarding the Black Madonna recounts how one pilgrim, on making some uncomplimentary remarks about the statue, incurred the not inconsiderable wrath of the Madonna. The lady in question turned in horror to see her child plummeting down the cliffs towards the sea. However, in an act of mercy and a demonstration of her unworldly powers, the Madonna made a bank of sand rise from the sea to cushion the child's fall. Hence the curious geographical formation of which more later.

Q: Can you relate the story of Tindari?

A: The Sanctuary of the Madonna del Tindari in Tindari in the diocese of Patti (Province of Messina) is situated on top of a hill overlooking the sea. A Greek colony had built the city of Tindari three centuries before the Christian era, but it was later destroyed by an earthquake. According to tradition, during the time of iconoclasm (7/8 c) the effigy of the Mother of God was transported by sea to the eastern shores of Sicily. A raging tempest forced the ship to land at Tindari where the sailors entrusted monks with the image of Our Lady. This was the origin of Our Lady of Tindari.

The sanctuary was robbed and burnt by pirates in subsequent centuries but was also assiduously rebuilt and restored by bishop and faithful. The official feastday is that of September 8. The image is that of a "Madonna Bruna," a dark Madonna. It was crowned in 1940 and attracts many pilgrims yearly.

(#13) Madonna del Tindari, Sicily: The sanctuary of Tindari sits on a high bluff on the northern shore of Sicily. A woman from a far-away country had come to fulfill a vow to the Madonna of Tindari for saving her little girl's life.  When the woman reached the sanctuary, after a long journey, she openly expressed her disillusionment upon seeing that the Madonna's face was black. The moment she expressed her irreverence, her little girl, who had wandered away from her mother, fell from a cliff.  The woman called upon the Madonna to again save her child's life. But the miracle had already happened - the sea had withdrawn so the girl could fall on soft sand. The woman now believed in the divine powers of the Madonna she had mocked and the sea stayed at a distance permanently as a reminder of what had happened. [60]

Personal note:  fascinating article!  This example made me think immediately of La Virgen of Guadalupe:

Probably the most prominent miracles are apparitions of the Madonna.  In these accounts, she appears to someone and requests or demands that sacred space (a chapel or church) be built to honor her.   She is often very specific about where she wants it to be built.  For example, according to a tradition still celebrated today, the Madonna caused snow to fall in August in Rome so she could outline where she wanted her church to be built.  It was built and became the major Roman Basilica, known as Santa Maria Maggiore in which is venerated a powerful Black Madonna, Madonna delle Neve, Madonna of the Snows. Sometimes no request is necessary, as the vision alone is sufficient to cause a place of honor to be built at that location. Other times it takes several requests or an additional sign of power, to convince an uncooperative church official, or to aid a seer whose word is not believed. (emphasis mine)


And finally, closer to my home in New Jersey:

Of the three chapels, the oldest and therefore the most mysterious—since the original pioneers are deceased—is that of the Black Madonna. The Madonna is a reproduction, none too well done, of an ancient statue venerated at in Tindari, formerly an ancient city in the northerneastern part of Sicily and today a small village in the province of Messina. The original Madonna which was buried in the mountains near Tindari to save it from Turkish Saracen invasions in the seventh ninth century, was black, not because it lay moldering in flames, but as homage to the biblical description "Nigra sum, sed formosa"—"I am black, but beautiful".

The festivity of the Black Madonna was celebrated for the first time in New York on September 8, 1905. The following year, 1906, a congregation of Pattesi was established and the now existing statue of the Black Madonna was constructed under their sponsorship by Santo Bucca of Barcellona, Sicily. Though the original statue was in wood (of Libano cedar of Lebanon), the present image here in New York was constructed of stucco.

The article is very interesting historically and has some other pictures of the statue of the Madonna.

Well, I have spent all morning with the Black Madonna (post written 6 Dec) - there are dishes in the dishwasher that need to be unloaded, there are dishes in the sink that need to be loaded into the dishwasher, my Thanksgiving decorations are still up and the Solstice/Christmas/Yule ones waiting patiently to show off - but I must first dust and then vacuum. And Kylie, who loves to do the laundry, has just bounded up the stairs to let me know that the dryer has commanded her to retrieve me so that the clothing can be folded. Immediately. For when this Border Collie is on a mission (and they all are!), she is relentless and resistance is futile!

I see that Matt Fox's #9 point doesn't really jibe with this post ~ maybe my meandering the paths of the web in search of the Black Madonna counts as a dance.  It's always celebratory for me to discover something new about Her!

Please visit Rebecca, who is hosting Virgin a Day for these first 12 days of December.

From Matthew Fox's essay on the Black Madonna.


9.The Black Madonna calls us to Celebrate and to Dance. The Black Madonna, while she weeps tears for the world, as the sorrowful mother, does not wallow in her grief, does not stay there forever. Rather, she is a joyful mother, a mother happy to have being and to have shared it with so many other creatures. She expects joy in return. Celebration of life and its pleasures lie at the core of her reason for being. She expects us to take joy in her many pleasures, joy in her fruits. Sophia or Wisdom in the Scriptures sings to this element of pleasure and eros, deep and passionate love of life and all its gifts.
I have exhaled a perfume like cinnamon and acacia,I have breathed out a scent like choice myrrh….Approach me, you who desire me,And take your fill of my fruits,For memories of me are sweeter than honey,Inheriting me is sweeter than the honeycomb.They who eat me will hunger for more,They who drink me will thirst for more.Whoever listens to me will never have to blush….(Eccl. 24.15, 19-22)
Celebration is part of compassion. As Meister Eckhart puts it: “What happens to another be it a joy or a sorrow happens to me.” Celebration is the exercise of our common joy. Praise is the noise that joy makes. Joy, praise and celebration are intrinsic to community and to the presence of the Black Madonna. She did not birth her Divine Child by whatever name in vain. She opts in favor of children, in favor of life, in favor of eros and in favor of biophilia. She is a lover of life par excellence. She expects us, her children, to be the same.