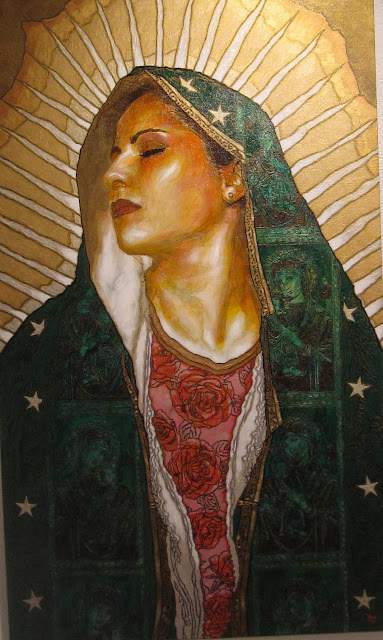 (Image and text from here)

His (George Yepes) recent Virgen doesn’t shy away from exploring the sensual side to this iconic figure. He leaves it up to us to decide what moment in the life of Mary he is portraying:


“Is it when she learns she is with child?  Or when she sees her son suffering on the cross. Perhaps she is carrying the pain of her people – or the pain of mothers whose children are in distress.” 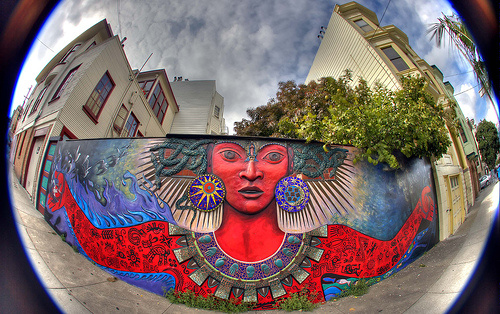 (Image and text from here)

“Tonantzin” is thought by some to be a generic term for any Aztec goddesses.  Others think the word refers to one goddess who has many aspects, each with a different name.  (For example, the goddess of childbirth, of war, of corn, etc.)

The image of the brown-skinned Virgin of Guadalupe is thought to be a synchronized (note ~ I think she means syncretized) version of Tonantzin and the Virgin Mary, used by early 16thcentury missionaries to convert  the indigenous people to Catholicism.

There is some debate about the missionaries’ motivation:  did they want to destroy the notion of the female diety or were they willing  to co-exist with it?

While we may not know their intention, we can see that the image they used of the Virgin of Guadalupe ( Catholic teaching say it was revealed by God) is one of a gentle, compassionate, self-sacrificing woman.

Artist Lalo Garcia (link to article) says it is significant that the Virgin of Guadalupe appeared in Mexico without her infant son. Unlike European depictions of the Virgin Mary, she appears as a being in her own right.


“When you look at the scripture,” Garcia says,  ”Mary vanished until the crucifixion. Mary of Nazareth is a nobody. In the Americas, she is the boss.  Anything related to Christianity you’ll wind up with her.”

By contrast, renditions of the Virgin Mary by European artists portray her as an almost-characterless figure (“an empty vessel”) who bows in submision to her own son.

(Collette) Crutcher turns that notion on its head.  Her Tonantzin stands front and center, a powerful diety making no apologies for who she is.  She looks like she woke up from a 500-year nap and, disliking what she saw, is ready to set things straight.

Crutcher puts  the Virgin of Guadalupe in the middle of Tonantzin’s forehead.

The Virgin stands like a watchful third eye in the spiritual center of the goddesses’ body.


Call her Our Lady, La Nuestra Señora, Holy Mother—or one of her thousands of other names,” says Dr. Estés. “She wears hundreds of costumes, dozens of skin tones, is patroness of deserts, mountains, stars and oceans. Thus she comes to us in billions of images, but at her center, she is the Great Immaculate Heart.” With Untie the Strong Woman, Dr. Clarissa Pinkola Estés invites us to reconnect with “the fierce and loving Blessed Mother who is friendly, but never tame—she who flies to our aid when the road is long and our hearts are broken, ever ready to rekindle the inner fire of our creative souls.”

In her first book in more than a decade, Dr. Estés illuminates Our Lady through blessings, images, and narrative, including:

“The Blessed Mother is often ‘Friend to the friendless one’ and Mother to all—yet too many of us have been estranged from her for far too long.” Untie the Strong Woman opens a channel to this sacred and nurturing force—“breaking through walls that have held us back from her presence, and instead, inviting us to shelter under her starry green mantle.”

Both of these images are so powerful to me - they are part and parcel of how I experience The Big Lady, as I call Her.  Real and metaphor.  Actual and archetype. She is sensitive, compassionate, strong, powerful.
And most importantly, available.
Any time.
Any place.
Available.
To anyone.
Anywhere.
In any form.
Any shape.
Any color.
Any element.
She's there.
She's here.
Available.
And waiting.

At the beginning of this meme, I wrote that I wasn't sure I was going to participate because I didn't think I had anything to say.  Obviously, I was wrong!  I'm so glad that I had a change of mind and heart.  I have enjoyed this experience and loved visiting all of your blogs, reading your stories about Her and especially seeing your artwork about Her and reading your homages to Her. I thank you for allowing me the privilege of seeing a piece of your Soul.
Rebecca - thank you for hosting this Life affirming meme.  I cannot express how much I appreciate your generosity.  Thank you so much.  It's been a fabulous birthday present to myself thanks to you!  xoxo

Please visit Rebecca, who is hosting Virgin a Day for these first 12 days of December.

From Matthew Fox's essay on the Black Madonna.  You can read the entire essay here.

12. The Black Madonna calls us to reinvent education and art. The goddess also ruled at the university—she was “Queen of the sciences” and “mistress of all the arts and sciences” who was “afraid of none of them, and did nothing, ever, to stunt any of them.”[29] All learning was to culminate in her. She was about wisdom not just knowledge. The renaissance that the Madonna represented was both religious and educational.
Often the headdress of Isis depicts the full moon between curved horns and has the shape of the musical instrument that the Egyptians played in her honor called the sistrum. Plutarch stated that the purpose of the sistrum which is a kind of rattle was that “all things in existence need to be shaken, or rattled about…to be agitated when they grow drowsy and torpid.” [30] The Black Madonna shakes things up. Is this not an archetype for our times? Is she not a forebearer of a renaissance, one who comes to give new birth to a civilization, a birth based on a new sense of spirituality and cosmology and learning—a learning that reawakens us to our place in the universe? How will work in the world become wise as opposed to exploitive without wisdom? How will the human soul move from knowledge to wisdom without the kind of effort the goddess can bring? Without a balance of male/female, heart/head, body/spirit truly happening at all levels of education from childhood to professional degrees? How will a renaissance happen if education is left behind? What role will art play when the artist too lets go of the internalized oppression of the modern era and recommits himself/herself to serving the community and to serving the larger community of ecological sustainability? [31]
These are some of the questions raised by the return of the Black Madonna in our time. They beg for response. They beg for listening ears and attentive institutions. They beg for self criticism of nation-states, governments, corporations, academia, religion, law, professions of all kinds which are called to something new (and very ancient): a new relationship between earth and humans. One of mutuality, not mastering. One of joy and wonder, not boredom. One that honors all our relations. For this to come about some rattling of our modern cages and mindsets is in order. The Black Madonna provides such a shake-up. Still. After all these centuries.
Posted by Delphyne at 8:00 AM