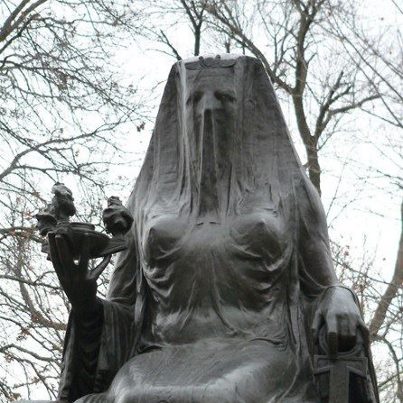 Considering Herbert Hoover's Quaker upbringing, you might be wondering why there is a statue of Isis, "the Egyptian goddess of Life", sitting on the grounds of his birthplace. This bronze, seven and a half foot tall statue is the work of Belgian sculptor Auguste Puttemans, and was a gift from the children, refugees, and soldiers of Belgium in gratitude for Hoover's famine relief efforts on their behalf during the First World War.

The Statue of Isis faces the Herbert Hoover Birthplace, and provides a visual connection between his upbringing and his later achievements.

When the Belgians shipped the finished statue to California's Stanford University in 1922, it remained on campus until the President and Mrs. Hoover brought it to West Branch in 1939. Both of them wanted it to be placed in a position where it was "contemplating the house," which is why Isis sits in her throne-like chair facing the Birthplace Cottage.
Look closely, and you'll notice that her veil, a symbol of the mysteries of life, cannot hide the strength of her features. Her right hand carries the torch of life-its three flames represent the past, present, and future-while her left hand holds the key of life.  (emphasis mine)
An Egyptian goddess and an American President. It's an unlikely pairing, but one that provides a powerful visual link between Hoover's childhood and his life's dedication to the welfare of others.
Text is from the National Park Service.
Please visit Rebecca, who is hosting Virgin a Day for these first 12 days of December.

From Matthew Fox's essay on the Black Madonna:


11. The Black Madonna Calls us to a renaissance of culture, religion and the city. Isis often wears a regal headdress that symbolizes her name as meaning “throne” or “queen.” Erich Neumann has written about Isis as “Throne.”
As mother and earth woman, the Great Mother is the ‘throne’ pure and simple, and, characteristically, the woman’s motherliness resides not only in the womb but also in the seated woman’s broad expanse of thigh, her lap on which the newborn child sits enthroned. To be taken on the lap is, like being taken to thebreast, a symbolic expression for adoption of the child, and also for the man, by the Feminine. It is no accident that the greatest Mother Goddess of the early cults was named Isis, the ‘seat,’ ‘the throne,’ the symbol of which she bears on her head; and the king who ‘takes possession’ of the earth, the Mother Goddess, does so by sitting on her in the literal sense of the word.[28]
The twelfth century renaissance was especially conscious of the role of “throne” and the goddess. In Latin the word for “throne” is “cathedra.” The medieval church gave birth to cathedrals—over 125 were built the size of Chartres—and every single one was dedicated to Mary with such titles as Notre Dame de Chartres, Notre Dame de Lyons, Notre Dame de Paris, etc. Over 375 other churches the size of these cathedrals were built dedicated to Mary also. In many of these cathedrals a statue to the Black Madonna can be found even to this day. A cathedral by definition meant the throne where the goddess sits ruling the universe with compassion and justice for the poor. Anthropocentrism, clericalism and sexism have co-opted the invention of cathedral to mean the “place where the bishop has his (usually his) throne.” This is false. The cathedral is designed to be the center of the city, it is bringing the goddess to the center of the city to bring the city alive with goddess energies and values. Cities were birthed in the twelfth century with the breakup of the land-based economy and religious and political system of the feudal era. The youth fled to the cities where religion reinvented itself apart from the monastic establishment that ruled for eight centuries and where education invented itself apart from the rural monastic educational system in the form of universities. Worship reinvented itself in the Cathedral in the city and apart from the monastic liturgical practice in the countryside.
Today for the first time in human history more than 50% of humans are living in cities; By 2015, over two-thirds of humans—a great proportion of them young people—will be living in cities. The Black Madonna and the “throne as goddess” motif contribute to the resurrection of our cities. They give us a center, a cosmic center, a synthesis and unity and a life-energy by which we can redeem our cities and take them back from lifelessness and thanatos. Artists gather in a city. Celebration and ritual happen in a city. Nature and human nature congregate in a city. No wonder Meister Eckhart and other medieval mystics celebrated the human soul as city and the city as soul. It is the task of a renaissance to bring soul back to city. We might even define renaissance as a “rebirth of cities based on a spiritual initiative.”
Posted by Delphyne at 8:00 AM