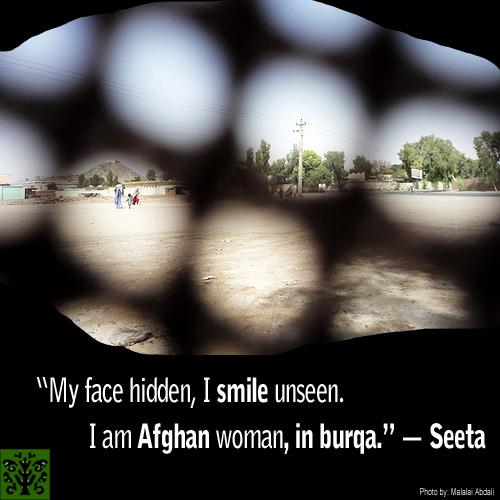 This is the view a woman sees when veiled with a burqa.

I found this site - Afghan's Women's Writing Project - today and, although I felt a combination of fury and despair when reading some of the writings, I also felt hope for these women who were/are able to tell their stories.  The Project also has a FB page which you can find here.


Can I talk?
No.
Can I go to school?
No.
Can I work outside?
No.
Can be myself?
No.
Can I ask why?
You are a girl.
The pain of being a girl comes down as tears on my cheeks. For centuries I have cried for being a girl. They taught me to be silent when I wanted to speak for myself. They taught me to stay in a dark room because I did not deserve the light. They did not let me be myself because I was created to be property. They closed doors that would let me escape and opened only the doors they wanted me to walk through. I cried, nobody heard me. I suffered, nobody cared. I felt lonely, I was too unworthy to be accompanied.
And when I said I want to have the same rights as you, they turned their backs, they hit me, raped me, cut my nose, and stoned me. There must be no independence or happiness for a woman. For centuries they have been happy to use me as a secondary sex. But they do not let me be happy. They do not want me to think that we could be the same.
My heart is full of words they said I’m not worthy to hear. My heart is as big as the universe and full of words I am not allowed to say. I remember the days I watched them going to school and all I could do was look through the window and cry without making a noise. I remember when I asked them to let me go to school too, but they slapped me and reminded me of the sour fact: I am a girl.
I cannot count how many times I have wished I was born somewhere else–or that Afghanistan were something else. I wish I could have the same as they have, just the same, nothing more. Just the same rights as they have. I keep this wish beside the bunch of wishes in the universe of my heart. It is the only thing they cannot grab for themselves.
By Fatima H.

A brief description of AWWP from their FB page; their website is much more comprehensive and recommended if you want to find out more information about them and their projects.  You can also read more stories from the girls/women forced to live under these brutal conditions.

Supporting Afghan women to have a direct voice in the world, not filtered through male relatives or members of the media.www.awwproject.org Follow us on Twitter at @AWWProject.
Mission
The project reaches out to talented and generous women author/teachers here in the United States and engages them, on a volunteer, rotating basis, to mentor Afghan women online from Afghanistan. (We are using women teachers solely due to cultural sensitivities in Afghanistan.) Through this ongoing interaction, we hope to encourage the women to develop their voices and share their stories. Portions of the work will be put on a blog on a regular basis. Due to security concerns, we will use the Afghan women writers’ first names only, editing out all names of family and friends and removing locators. Nevertheless, the existence of the blog in the world is a key part of the project for several reasons. First, it is intended to instill a sense of pride for these women. Secondly, it is also intended to educate us, the teachers and readers of the blog, about what the Afghan women’s childhoods and young adulthoods were like under the Taliban, and what they feel about current conditions in their country. The blog is also meant to be a record of the project itself. Finally, it is intended to provide a positive link between Afghans and Americans at a time when those relationships have to some degree soured.
Company Overview
The Afghan Women’s Writing Project began as an idea during novelist Masha Hamilton’s last trip to Afghanistan in November 2008. Her interest in Afghanistan was sparked in the late 1990s during the Taliban period, when she understood it was one of the worst places in the world to be a woman. Masha first visited the country in 2004, and was awed and inspired by the resolute courage of the women she met. When she returned, she saw doors were closing and life was again becoming more difficult, especially for women. She began to fear we could lose access to the voices of Afghan women if we didn’t act soon. The Afghan Women’s Writing Project is aimed at allowing Afghan women to have a direct voice in the world, not filtered through male relatives or members of the media. Many of these Afghan women have to make extreme efforts to gain computer access in order to submit their writings, in English, to the project.