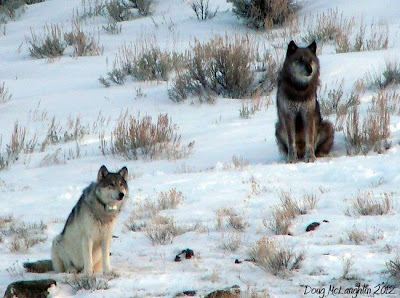 The extinction of wolves in America is right on track. I hope Wyoming Hunters and Government are happy with themselves. But the buck stops at the top, with President Barack Obama appointing a rancher, Ken Salazar as Secretary of the Interior. That's like putting a bear in charge of a salmon fishery. It didn't take long for Salazar to delist the wolf off the Endangered Species List and, at the rate they are going, it doesn't look good for the wolf. Together, they have washed away 100 years of trying to bring the wolf and the wild back to its proper ecological balance.

Here's another fact for you. Salazar and the Wyoming State Government say Wyoming has too many wolves. How many wolves do YOU think constitute too many in a state that's 97,818 square miles and the 10th largest state in the Union. According to them, 340 is too many. Yep, you heard me right. There are about 340 Wolves in a state that takes up 97,818 square miles. Make that 338 as the two in the photo have now been killed.

One more fact? Wyoming wolves bring upwards of 10 million dollars annually to the state from folks that come to see the wolves in Yellowstone. But not for long.


UPDATE:  This is sickening!!

Yellowstone National Park’s best-known wolf, beloved by many tourists and valued by scientists who tracked its movements, was shot and killed on Thursday outside the park’s boundaries, Wyoming wildlife officials reported.
The wolf, known as 832F to researchers, was the alpha female of the park’s highly visible Lamar Canyon pack and had become so well known that some wildlife watchers referred to her as a “rock star.” The animal had been a tourist favorite for most of the past six years.
The wolf was fitted with a $4,000 collar with GPS tracking technology, which is being returned, said Daniel Stahler, a project director for Yellowstone’s wolf program. Based on data from the wolf’s collar, researchers knew that her pack rarely ventured outside the park, and then only for brief periods, Dr. Stahler said.
Read the rest of the story here.

Email ThisBlogThis!Share to TwitterShare to FacebookShare to Pinterest
Labels: Animals in Need, Politics