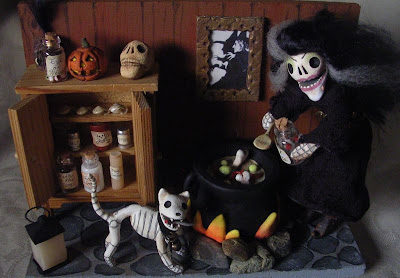 (Image found here)
(Rebecca is hosting La Calaca a Day for the month of October.  You can participate here.).

A dark Cave. In the middle, a Caldron boiling. Thunder.
Enter the three Witches.

1 WITCH.  Round about the caldron go;
In the poison'd entrails throw.—
Toad, that under cold stone,
Days and nights has thirty-one;
Swelter'd venom sleeping got,
Boil thou first i' the charmed pot!

2 WITCH.  Fillet of a fenny snake,
In the caldron boil and bake;
Eye of newt, and toe of frog,
Wool of bat, and tongue of dog,
Adder's fork, and blind-worm's sting,
Lizard's leg, and owlet's wing,—
For a charm of powerful trouble,
Like a hell-broth boil and bubble.

3 WITCH.  Scale of dragon; tooth of wolf;
Witches' mummy; maw and gulf
Of the ravin'd salt-sea shark;
Root of hemlock digg'd i the dark;
Liver of blaspheming Jew;
Gall of goat, and slips of yew
Sliver'd in the moon's eclipse;
Nose of Turk, and Tartar's lips;
Finger of birth-strangled babe
Ditch-deliver'd by a drab,—
Make the gruel thick and slab:
Add thereto a tiger's chaudron,
For the ingrediants of our caldron.

2 WITCH.  Cool it with a baboon's blood,
Then the charm is firm and good.


The above appears at the beginning of Act IV, Scene 1 as found in: