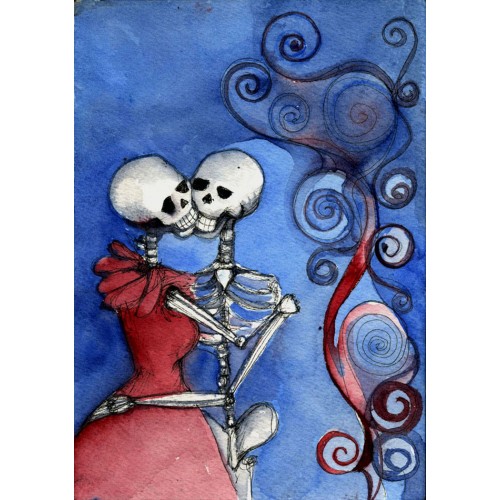 
However inspired they may have been by the immaculate beauty of the sky and water they saw every day, prehistoric artists had no way to render the color blue with paint. As Heinz Berke of the University of Zurich has pointed out, the famous cave paintings at Lascaux and surrounding sites, which date back some 20,000 years, are notably lacking in blue.

“Early mankind had no access to blue, because blue is not what you call an earth color,” said Dr. Berke, a chemist who has studied the history of blue pigment. “You don’t find it in the soil.” Only with the advent of mining, he said, could sources of blue pigment be extracted.
The first stable blue colorant used in the ancient world came from lapis lazuli, a semiprecious stone mined in Afghanistan beginning about 6,000 years ago. The Egyptians prized all things lapis, combining it with gold to adorn the tombs of the pharaohs, or powdering it into eye shadow for Cleopatra.
But the scarcity of the mineral drove the Egyptians to seek new blues through chemistry. By heating together limestone, sand and copper into the chemical compound calcium copper silicate, they invented the richly saturated royal-turquoise pigment called Egyptian blue. Variants of the recipe were taken up by the Mesopotamians, the Persians, the Greeks and the Romans, who built factories devoted to blue’s production.
In ancient China, chemists created blue pigments by blending copper with heavy elements like barium, lead and mercury. Unfortunately, those same heavy elements were often brewed into popular — and ultimately toxic — elixirs. “It’s said that 40 percent of the Chinese emperors suffered from heavy-element poisoning,” Dr. Berke said.
The Mesoamericans invented the third of the three great blues of ancient civilization, a vivid and durable pigment called Mayan blue that scientists recently suggested could be a mix of indigo plant extract, a clay mineral called palygorskite, and resin from the Maya’s sacred incense, copal.
Whatever its origin, the blue pigment remained rare and expensive until the dawn of the industrial age, which probably explains blue’s longstanding association with royalty and divinity, and possibly why it is a widely favored color today. According to Steven Bleicher, a professor of visual arts at Coastal Carolina University, blue got a big endorsement in the year 431, when the Catholic church decided to “color code” the saints.
“Mary was given a blue robe,” he said, “a dark, wonderful and expensive blue befitting the queen of heaven.”
Over time, Mary blue became navy blue, the color of trustworthiness and authority, of bankers and the police. At this point, navy blue is so tightly linked to the notions of authority, Dr. Bleicher said, that the United Nations specifically avoided the color in designing the uniform of its peacekeeping troops and instead opted for a softer robin’s-egg blue.
As for the color-coding of the sexes, the idea that blue is for boys and pink means girls didn’t really gain traction in this country until the postwar baby boom, according to Jo B. Paoletti, a historian of dress at of the University of Maryland and the author of the new book “Pink and Blue: Telling the Boys From the Girls in America.” Even then, some parts of the South lagged in adopting the strict rules of childhood attire. “I found examples of pink clothing for boys way up through the 1970s,” Dr. Paoletti said.
So, too, should we recall in today’s bitter blue-red, donkey-pachyderm dialectic that just a few years ago, red stood for Marx.

(Rebecca is hosting La Calaca a Day for the month of October. You can participate here.)