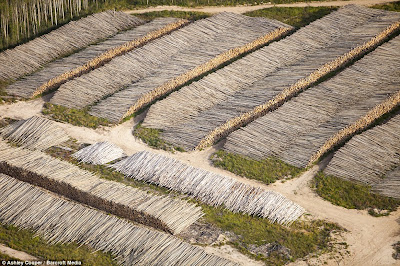 Like matchsticks: Stacks of Boreal forest trees that were cut to make way for the new tar sands mine.  There are more pictures at the link to the article.

These incredible pictures show the bleak landscape of bitumen, sand and clay created by the frantic pursuit of 173billion barrels of untouched oil.

The Tar Sands in Alberta, Canada, are the world's third largest oil reserve - but lush green forests once blanketed an area there larger than England.

The region where the blackened earth now stands has been dubbed as the most destructive industrial project on earth by shocked environmentalists.

The tree which moves some to tears of joy is in the eyes of others only a green thing that stands in the way.  Some see Nature all ridicule and deformity, and some scarce see Nature at all.  But to the eyes of the man of imagination, Nature is Imagination itself.

The pictures are heartbreaking and infuriating to me.  This wanton destruction really is about the ignorance of human beings in their quest for more money and profit at the expense of the living Earth.  I say ignorance because these corporations, which are NOT human beings, and their CEOs, who do not act like intelligent human beings, refuse to think of or consider ways to obtain energy without killing the land and its inhabitants.

Expediency is their byword.

They are addicts who will do anything for their fix - in this case, greed is their addiction and they lie and destroy without compunction.

They refuse to think about the present and future of our Earth.  It's as if they think there is another planet to go to once they've used up everything on this one.

They are seriously deranged and need to be removed from positions where they make these decisions.  How?  I don't know, especially since the multinational corporations seem to be are running everything these days - they have no allegiance to any country, to any culture.  It's all about them, their profits, their power and they're not about to give that up without violence on their part.  The Occupy Movement witnessed that.  The Tar Sands Blockade is also seeing that violence visited upon them.

Sometimes, I feel helpless to do anything about this kind of horror; other times, I know that the Earth will survive our species' toxic behavior; and still other times, I'm ready to make a poppet and get the pins ready.

Right now, I'm in the poppet and pins mode. 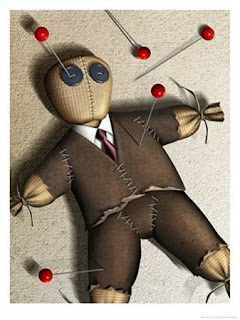 Email ThisBlogThis!Share to TwitterShare to FacebookShare to Pinterest
Labels: This disturbs me