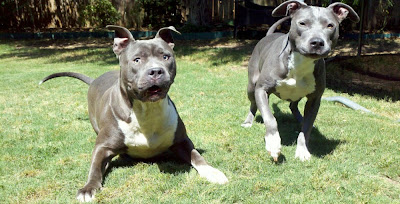 Lilo and Stitch are two beloved family dogs who have never bitten, scratched, or hurt any person or animal in their lives, but they are now at risk of being euthanized. The dogs also have the support of Fort Worth Animal Control officer, Harley Davidson, who testified in court that he interacts with the dogs daily and that they have never shown any sign of aggression. Despite these facts, Lilo and Stitch have been labelled as "Dangerous Dogs" and taken away from their family.
Ironically, Lilo and Stitch are facing euthanasia because of a complaint from a person they know and recognize as a friend and a neighbor. According to Lilo and Stitch's owner, Rana Soluri, Lesley Miller adored Lilo and used to play with her, bragging about how sweet-natured and loveable she is. So how did a woman Lilo knows and loves suddenly change her mind and decide that she and her brother Stitch were a threat to her?

You can read the rest of the story here.

A petition is here if you would like to add your name to save these dogs from being killed.

Great news update: After the injunction hearing today, the Temporary Restraining Order has been kept in place and the City of Fort Worth is again prohibited from euthanizing Lilo and Stitch.