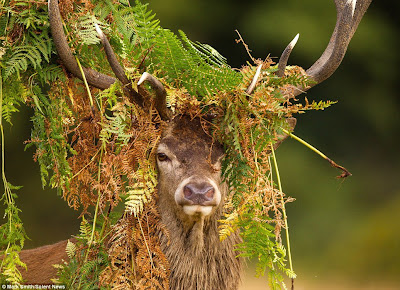 This guy is so handsome, isn't he?  It's a great picture that someone posted on FaceBook.  Here are a few links to the mythology of the deer which I found interesting.

In many European mythologies the deer was associated with woodland deities. Two tales of Artemis, the Greek goddess of wilderness, tell of her wrath and retribution visited upon those who trespassed into her domain. By controlling the weather she kept King Agamemnon's fleet bound for Troy confined to port, to avenge the killing of a stag sacred to her. Another hunter, Acteon, used a stag's pelt to sneak up on Artemis whilst she was bathing in the forest. As punishment for seeing her naked, she changed him into a stag and sent him back into the woods to be hunted down and killed by his own hounds. Other woodland goddesses, such as Diana, the Roman equivalent of Artemis, were similarly associated with deer and their perceived qualities of gracefulness and swiftness.


For the Huichol people of Mexico,[11] the "magical deer" represents both the power of maize to sustain the body and of the peyote cactus to feed and enlighten the spirit. Animals such as the eagle, jaguar, serpent and deer are of great importance to the Mexican indigenous cultures. For each group, however, one of these animals is of special significance and confers some of its qualities to the tribe.

For the Huichol it is the deer that holds this intimate role. The character of the Huichol tends to be light, flexible and humorous. They have avoided open warfare, neither fighting against the Spanish nor Mexican governments, but holding to their own traditions. The Huichol hunt and sacrifice deer in their ceremonies. They make offerings to the Deer of the Maize to care for their crops, and to the Deer of the Peyote to bring them spiritual guidance and artistic inspiration.  (Wiki entry)


The deer is associated with the Moon and water, as Artemis is. The word deer has been translated 'shining fire' which connects Artemis with the Sun.


Deer teaches us how powerful it is to be of gentle demeanour, to exert keen observation and sensitivity. Deer's are in tune with nature and all it comprises. They are sacred carriers of peace and show those with this power animal how to open their hearts and love unconditionally.


To walk its streets is to enter the old Japan of kimonos and geta, or wooden sandals, but the traveler must watch his or her step, because in Nara there seem to be as many deer as people, and they have the complete right of way. Deer, by the way, are grazers, which means they eat around the clock. The deer of Nara live to eat and are not fussy about what that may be.

Local mythology says a deity named Takemikazuchi arrived in the old capital on a white deer to act as its protector, and as a result of this legend, for the last 1,300 years the deer of Nara have been considered sacred.


The tradition of choosing a symbolic goddess and god as official participants in the Beltane ritual captured Marion Zimmer Bradley's imagination in her novel The Mists of Avalon. In Bradley's retelling of the King Arthur legend, the Beltane celebration is a sacred ritual involving a high-ranking male and female virgin to represent the God and Goddess. The god in this case is called the "King Stag"; he must run through the woods with a pack of deer, followed by his own huntsmen, and only after he has successfully locked antlers with and killed a stag that he can return to the festival and claim his right as consort to the Goddess. Other couples also celebrate in this way, but it is only these two who become the God and Goddess incarnate.

Email ThisBlogThis!Share to TwitterShare to FacebookShare to Pinterest
Labels: Mythology