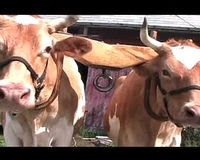 At the end of October 2012, Bill and Lou, the hard-working team of oxen for Green Mountain College’s Cerridwen Farm, are scheduled to be slaughtered.


Bill and Lou have worked as draft animals on the school’s farm for over ten years. They have provided many services for the college and are mascots & friends to many students, past and present. Since Lou sustained a recurring injury to his left rear hock, he no longer has “value” to GMC, so they decided to purchase a new team and send both of these oxen to the slaughterhouse to be "processed" (euphemism for killed) for their meat.
Please encourage Green Mountain College to allow Bill & Lou to be adopted by the VINE Sanctuary in Vermont where they can live out the remainder of their lives. They've worked so hard for the college for 10 years and deserve a better fate than ending up on someone's plate!

UPDATE: Bill and Lou's slaughter has been postponed -- for now. But they're not out of the wood yet -- please keep signing to take action to spare them!

Lou was recently euthanized due to his injury, which as many have pointed out was at least more humane than sending him to slaughter. No decision has been made about his teammate, Bill. What baffles me is why the college didn't simply let the sanctuary take both of them to a safe place where Lou might have been able to recover.

The college's page (see below) has two newspaper reports with more details -- one from the Boston Globe, the other from the NY Times.
http://www.greenmtn.edu/farm_food.aspx
Posted by Delphyne at 2:32 PM