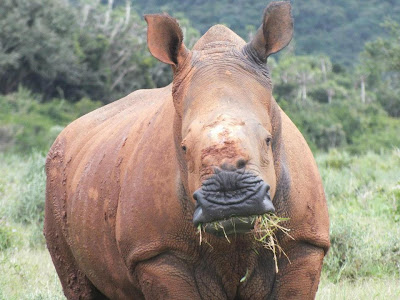 Meet Thandi.  She is a rhinoceros living on the Kariega Game Reserve in South Africa.  Notice that her horn is missing.  From Kariega's website, here is how she lost it and how 2 other rhinos lost their lives from poaching:


Unfortunately, Kariega has not escaped this scourge. On the 2nd of March 2012 one cow and two bull rhino’s were poached at Kariega. Tragically, one bull was fatally wounded and died during the course of the night, whilst the remaining two were severely injured, but showed an incredible will to survive. For 24 days wildlife veterinary expert, Doctor William Fowlds, worked tirelessly with the Kariega team to give these survivors the best possible care and chance for recovery. Their bravery was unbelievable, and inspired our rangers to nickname them Thandiswa and Themba, two Xhosa names meaning courage and hope. Sadly Themba (HOPE) suffered a leg injury on the night he was poached and as a result of infection passed away on the morning of the 26 of March 2012. Six months after their brutal attack, Thandi continues to inspire and amaze us with her incredible fighting strength and miraculous recovery.

Poaching this magnificent animal for its horn is simply cruel and immoral.  I am a big fan of much of TCM (Traditional Chinese Medicine) except when it comes to this or bear bile or tiger penises - herbs are fine, roots are fine, animal parts are not fine, especially when the animals killed are endangered or are tortured. Really, it's enough that we eat them, raise them in horrible factory farm conditions - but to kill for a horn?  An elephant tusk?  A tiger penis?  Keep a bear with a permanent hole in its body to extract bile while imprisoning the animal in a small cage?  All for the sake of humans and our ignorance and greed?

Has our species devolved so much that we indulge in this sort of cruelty?  Is this the money aspect of TCM rearing its ugly head, as the money aspect in so many other arenas does?  Is it both?  It's just so disturbing to me...

Fortunately, there are places like Kariega and people like Yao Ming who are doing everything they can to educate and protect these animals from humans. I, for one, am grateful to them and give them my sincerest thanks.